The importance of abdominal training for runners and triathletes has been demonstrated often in the pages of IMPACT Magazine. Now it’s time introduce anti-rotation core training. Runners and triathletes need to have strong stable cores to ensure maximum running economy/efficiency. This ability to resist unwanted or unnecessary motion in the trunk and hip regions will result in improved performance and will reduce the risk to injury. Achieving optimal lumbo-pelvic alignment, improving balance, and increasing power production are other benefits to anti-rotation abdominal training.

This phase of training continues the “bracing” technique discussed, for example, in “The Abdominal Landscape” in the Running Issue [March/April 2009]; however, different cues will be used to achieve lumbar stability. Bracing the abdominal wall involves contracting all the trunk muscles to create 360 degrees of stiffness around the lumbar spine. Imagine bracing your stomach to receive a punch: the abdominal wall does not move in or out, rather the muscles just stiffen. Also imagine you are creating a single unit with your ribs locked to your pelvis.

There should be no independent movement of either when your abdominals are braced correctly. You should still be able to breathe, and only a slight contraction is needed to stabilize the spine. Achieve neutral thoracic and lumbar spine positions before bracing, and maintain this optimal alignment throughout your anti-rotation training.

While performing running-specific core exercises, think control rather than quantity. The ability to minimize compensatory movement with optimal posture is far more important than counting crunches! Feel that you have conquered all the other abdominal exercises you’ve seen so far? If so, give this progression a try:

Front and Side Bridging (Beginner) 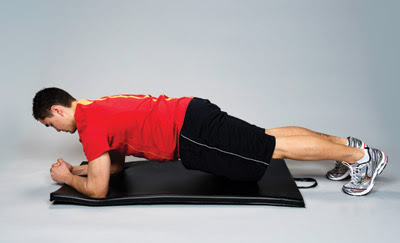 • Begin with isometric holds used to stabilize the lumbar spine against gravity.
• Perform a front elbow plank, positioned on your elbows and toes while maintaining a braced neutral spine. Squeeze your glutes and push your shoulder blades away from each other. Perform three sets, thirty seconds each.
• Now perform a side plank, lifting yourself on one elbow. Your feet should be on top of each other. Hold a straight body position from your ear to your ankle. Brace with a neutral spine, squeeze your glutes, and maintain square shoulders. Perform three sets of six performed at eight seconds each with a half-second break between each eight-second count. 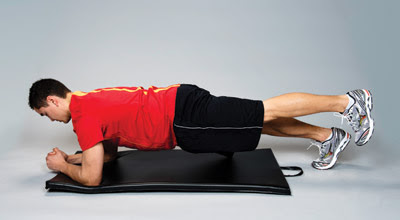 • By lifting one foot off the floor, the anti-rotation function of the core is challenged.
• Resist the rotational torque applied to the lumbar spine, and prevent the hips from dropping after you lift your leg. Squeeze the glutes to lift the leg and ensure not to increase your lumbar curve. Perform three sets of six, five seconds per leg. 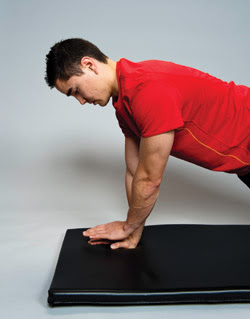 • The anti-rotation function of the core is challenged by lifting and moving a hand.
• Perform a plank on your hands and toes. Your hands should be directly under your shoulders with your feet hip-width apart. Squeeze your glutes and brace with a neutral spine. Lift one hand, move it toward and hover it over the opposite hand. With the same controlled movement, move the hand back to its starting position.
• Repeat with the opposite hand.
• Perform slow, controlled hand movements, alternating sides for thirty seconds. Perform three sets.
• Ensure not to move your hips or to make any compensatory body movements. Your plank should look like you still have four points of contact with the ground when, actually, you only have three. 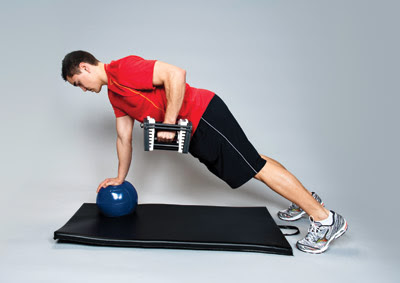 • Perform a plank with your hands on a bench and feet on the floor. Brace with a neutral spine and hold a dumbbell in one hand. Perform a rowing movement while maintaining a perfect plank as described (above). Perform three sets of twelve slowly controlled rows per side. 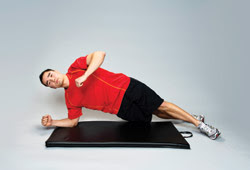 • This exercise takes the front plank and side bridge to the next level. The bracing concept and single unit (ribs locked with the pelvis) couldn’t be more important in this exercise!
• Set up in the front elbow plank as described above. With extreme concentration and abdominal control, rotate your body as one unit into a side bridge. You will lift one elbow and go from your toes to the sides of your feet. You will finish in a side bridge (as described above) with your top foot in front of the bottom foot.
• Rotate back slowly into the front plank. Now, try rotating to the opposite side bridge.
• Rotate back and forth for thirty seconds. Perform three sets.
• Ensure not to lift the hips first before moving your shoulders. This is very common when the pelvis isn’t locked with the ribs.

This article first appeared in the July/Aug 2009 issue of Impact Magazine.

Thanks for reading and RUN STRONG,