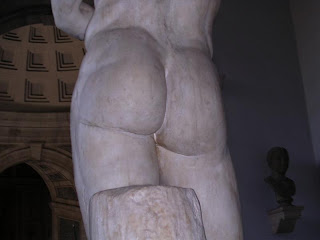 One of my clients asked me this question today:  “I put down below what I’ve been doing recently and was wondering if I’m doing sufficient work on the posterior chain.”

The posterior chain, or PC for short, is composed of normally three muscle groups:

These muscles are considered the PC because they are on the back side of the body.  Some coaches include any muscle you can’t see as part of the PC (e.g. upper back and calves); however, normally, only these three muscle groups are considered part of the PC.  Therefore, any exercise that utilizes and strengthens these muscles would be a PC exercise.
Makes sense right?

Typically, runners have overdeveloped quadriceps and hamstrings, but more importantly is the strength ratio between the hamstrings and the gluteus maximus.

Runner’s need to have a strong posterior chain because that is where a lot of the power comes from seen in the running stride.  Typically, runners have overdeveloped quadriceps and hamstrings, but more importantly is the strength ratio between the hamstrings and the gluteus maximus.  The big glute max should be the power house of hip extension, but most of the time, the hamstrings like to crash the party and take over.  This can be problematic for a runner.  This muscle imbalance can lead to long term issues with the hamstrings, hips and knees.  Runners need to improve the strength and recruitment of their posterior chain to:

Well, lets go through the list of exercises above and see what their individual focus is.

The paraspinals are activated to maintain a neutral spine.  This is one of Professor Stuart McGill’s favorite core stability exercises.  He’s the man who wants to kill crunches.  Anyway, the gluteals are also activated to maintain an extended hip to hold the leg straight out.  This exercise however is still not PC specific enough.  The main focus of this exercise is core stability.  Also, it can only be progressed and loaded so much that it will not develop strength in the PC as other exercises can.  These exercises will be discussed a little later…

This exercise is one of my favorites for developing lower leg strength and pelvic stability.  Because this exercise is performed on one leg, the stance leg’s hip has to stabilize the entire body.  This muscle does not get strengthened with running alone and is associated with knee injuries and IT Band Syndrome.  (This muscle I’m referring to is the gluteus medius by the way).  Anyway, like I said, this exercise is great and can be progressed by adding more weight or holding the weight in different positions.  For example, a weight can be held in each hand like a suitcase or a barbell can be placed on the upper back.  To increase difficulty, a heavy kettlebell can be held in the front racked position or even over head.  However, after saying all that, this exercise is still not as PC specific as others.

This exercise is considered PC specific because it utilizes the posterior chain to work together to perform the exercise.  Essentially, by lifting the hips, they are moving from a flexed position to an extended position.  The movement can be performed for reps or held for time.  It can also be loaded by placing a dumbell or barbell across your hips.  This exercise can actually be loaded very heavy depending on how much weight is added to the barbell.  However, in most gyms, you wont see any one perform this exercise loaded, unless they have been coached.  To improve strength, runners should lift heavy (sets of 5 or less) and this is one example where sets of 5 can be performed with a heavy bar held across the hips.  Normally, I include this exercise, unloaded with weight, but enhanced with a band in the muscle activation section of a runner’s warm-up.  The version in the picture not only activates the gluteals to extend the hip but also the hip abductors and the tibialis anterior (front shin) (both very important to a runner’s health!).

Reverse Lunge – target muscles are similar to the RFESS; NOT PC specific enough even though the hamstrings and gluteals are involved in the lift.

Hip Flexor Stretch – obviously a stretch to lengthen the hips flexors; NOT an exercise.

Knee Hug, Calf Raise, Warrior Lunge Walk – this is a dynamic warm up exercise I have my runners perform in their dynamic warm up (duh!).  The quadriceps, hamstrings and gluteals are involved in the lunge but this drill isn’t loaded; it’s only performed with body weight; therefore, it does not strengthen the PC as good as other exercises which are loaded can.

So, out of the exercises listed above, only one focused on improving the entire PC. Therefore, to answer his question, I would say he is NOT training his posterior chain as effectively as he could.

Stay tuned for important posterior chain exercises that are important for runners to perform.